Most people avoid doing things they’re not good at- I, on the other hand, find my way OUT of my comfort zone on a pretty regular basis. In the 5 minutes it takes you to read this race report, I had already soaked both of my feet in ankle deep mud, slipped on a patch of wet leaves, and fallen. I am not good at trail running. 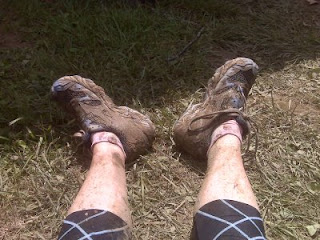 Having only completed 2 trail events, I had few expectations for the Dances with Dirt Gnaw Bone 50K- I simply wanted to gain the experience and cross the finish line in one piece. The area had been hit hard by rain all week, making the dirt trails solid mud by Saturday morning. After my “graceful” plunge to the ground and no signs of dry terrain for the next 30 miles, I wondered if I would in fact mark Indiana as my 20th state.

In an effort to counter my negative “self”, I focused on the fact that we had daylight (I had a horrible headlamp experience in Wisconsin) and the small group of runners I was surrounded by, as there was absolutely no sign of a trail anywhere. We knew we were on track because of all the white ribbons; however we ran into a group of leaders who were lost already at the 5 mile mark.

This race is described as a trail run, but the psychos from Michigan who put on the event use the term “trail” loosely. At different points in this race you are not even on trails, you’re just going through the woods hopping over logs and moving through thorn bushes. Oh yeah, 400 feet of ascent and decent on “trail” that is about a half shoe wide, several creeks and stream crossings, and lots of poison ivy. One mile of these trails easily felt like three or four.

There weren't too many females at the start line so I was very grateful to run into a pair of experienced gals who helped guide me through the physical and mental ups and downs of the next few miles. They also provided much needed conversation as a distraction from the pain I was starting to feel around mile 14- we discussed running apparel, hometowns, husbands, and races we had done and wanted to do in the future. I have always enjoyed the shared camaraderie among runners, especially other women.

By this point, we were deep into the forest and just as I was staring to think “wow- this is really peaceful”, one of my running partners lost her footing at a turn and twisted her ankle. Several failed attempts at limp-running later, she decided to wave the white flag…luckily we were very close to the mile 19 aid station, where the volunteers had already called transportation for two other injured runners. As I scraped the mud off my shoes and refueled with PB&J and salted potatoes, I thought “Ohmigosh, this race is like freakin’ Survivor- the last to DNF wins!”

Just after the final aid station at mile 23, I lost my other running partner to stomach issues and was totally by myself for quite a while. With nothing to focus on but putting one foot in front of the other (even my Garmin had called it a day!), I went from being absolutely terrified to…well, actually enjoying myself! Navigating the roots, rocks, and branches challenged my entire body and actually provided a welcome distraction for my tired legs. Several points required hand and knee climbs- literally grabbing onto tree branches or the steep ground ahead for support and pulling up. If it weren’t for the briar patches and being totally unfamiliar with what poison ivy looks like, I would have considered rolling down some of the hills grade-school-style! 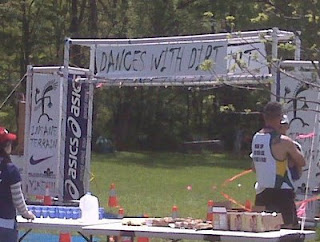 Reaching the finish line in 7:37:22, I was the fourth female overall in the 50K…which is very cool but still doesn’t promote me to being “good” at trail running- after all, this was “Survivor” race, remember?! It simply means I was the fourth fastest woman who was too stubborn (stupid?) to stop running. 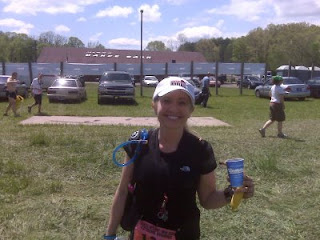